Congratulations, Master! One hundred years old, one century, and still alive, still amidst us and in us, we all still love you, we talk and think about you, everywhere in the world you can see artists who are influenced by your work, and young people look with growing fascination at your art, when they learn to know it. And deep in our heart we are also still a little bit afraid of you: you were a severe master, and sometimes we think: what would the master say about what we are doing now? 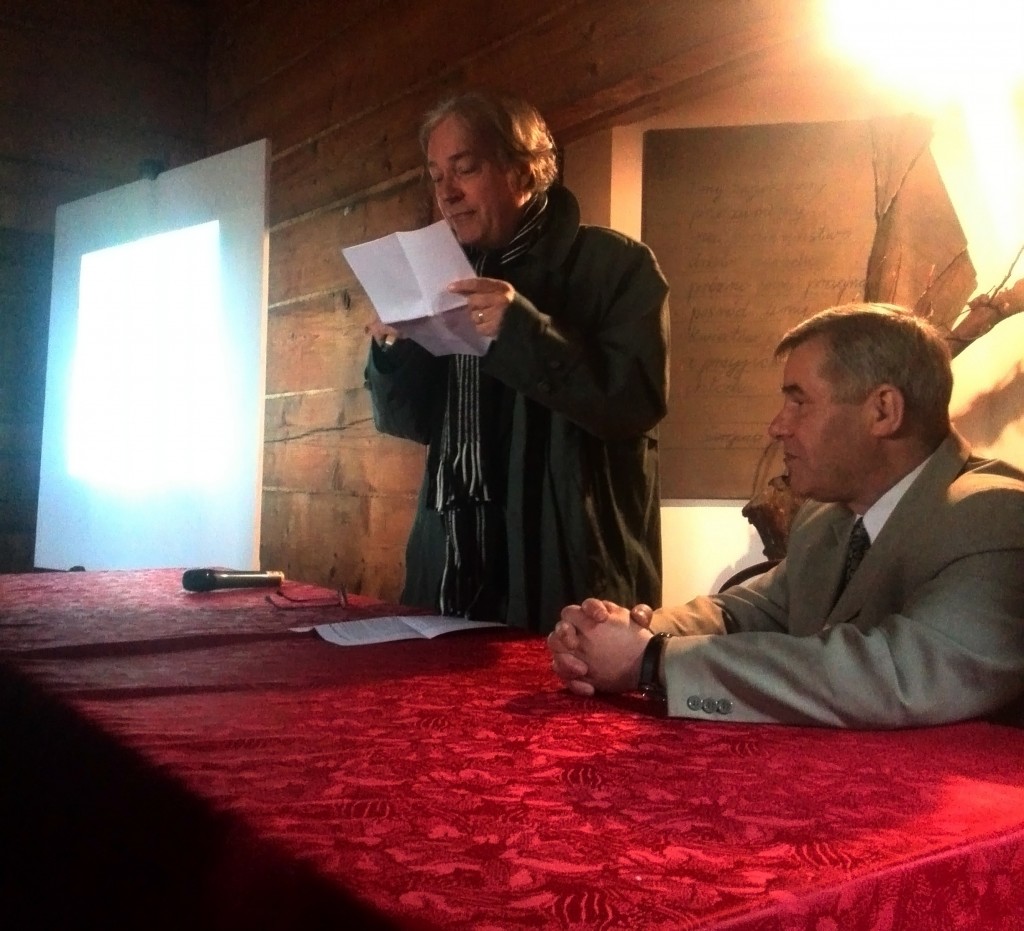 I met him in the eighties, when I was studying Eastern European culture and literature at the university of Ghent (Belgium) and afterwards while I was working as a dramaturge in one of the national theatres of Belgium. I saw Wielopole Wielopole in Louvain, and I must admit: I didn’t understand it very well, I was too much stucked into the stanislavskian theatre, and this was something completely new, shocking new. I didn’t understand it, but I knew, I felt that this was extremely important, that it could influence and change me.

And it did. I came to Poland to study theatre (my professor at university said that the best theatre was made in Poland), it was 1986. Unfortunately, most of the theatre masters were not in Poland, but abroad. But Kantor was here! I remember a sunny spring day in Cracow: I was walking through the streets of this wonderful town, I saw the name of one street: Kanonicza, and I saw house number 5 with a name on the door that smashed me in the face: Cricot.

I don’t remember how long I hesitated to open that door. Kantor had a reputation of having a furious character, so I waited and waited, I think I had a coffee first in a bar at Sienna Street, and finally I opened that door, I went through the hall and I opened the second door, the door at my right hand, the door of the Cricoteka.
There he was: sitting at his small table, black suit, white shirt, hat on his head, drinking coffee out of a glass, and above him the portrait of Witkiewicz.

He said: good afternoon, how do you do, please sit down.

These words changed my life. I talked with him, studied his work, translated his texts, saw his spectacles, spent hours and hours in the Cricoteka to watch his older spectacles, I published a book about him (still the only one in my language, i.e. Dutch), I made my phd on his work and I became a writer. Kantor was and is always with me.

He had his pleasant and his unpleasant moments: we all know. I remember him walking in the snow, saying: ‘O, I hate snow!’ I remember him sitting in the basement of Cricoteka during the first rehearsal of ‘I shall never return’, shouting that he needed a table, and I helped one of the actors to get a new, large table, and when we came into the basement with that table, Kantor stood up, grasped the table out of our hands and threw it through the basement. I remember him in Milano, where he asked me to show him the video recordings that I had made during the rehearsals, on a Sunday morning, and I tried to connect my videorecorder to his television, but I didn’t succeed, and we were crawling both, on our knees, around the television, looking for a solution. Et cetera. 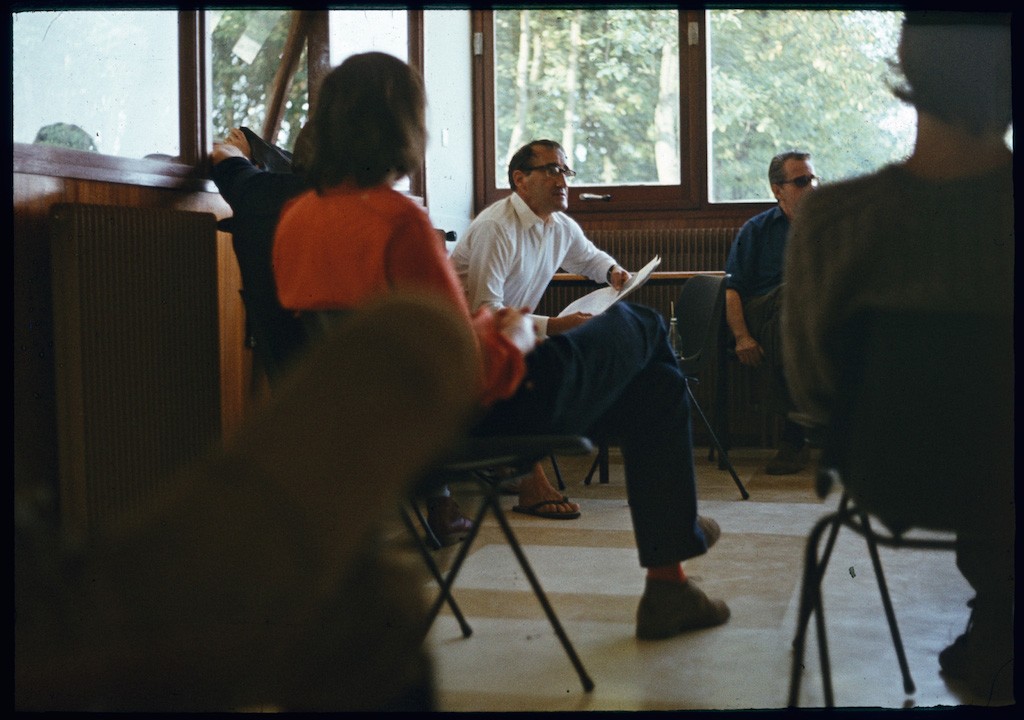 I remember a colloquium in Antwerp, where he was about to read his new manifesto. That was a sacred moment. He stood in front of the audience, he looked at the audience with passion, irony and pride, and also with anger. And he read his manifesto, which I later translated. When I read it now, it is still up to date and current, maybe even more. He warned for mass communication, mass consumption, mass media, almighty technology, almighty power, he was afraid that people would destroy each other, that peace was only temporary et cetera. Precisely! He lived under a communistic dictatorship (he liked to push his head against allmighty power) and he knew what it meant to be not free, and at the same time he saw how the capitalistic society (which would embrace his country in the same year of his death) was ready to install a new kind of dictatorship, completely different and extremely dangerous. We all know, today, what this means: we live in a society in which everything is commercialized and merchandised, in which technology is the new god and in which the Big Brother mentality (for which George Orwell warned already in 1948) is completely realised. Wars are not over. The individual is still the puppet in the hands of the power. Money rules everything. The catastroph is never far away. Kantor knew it. He warned us. In his manifesto, and also in his theatre: I think of the last scene in ‘I shall never return’, when everything is covered with black.

Master, you said that theatre is the world of death, that everything what happened on the stage was part of the world of death, that there was a gap between the audience and the stage, and that this gap could not be transgressed or trespassed by any means. This gap was the gap between life and death. What a wonderful, beautiful and tragic idea. You said also that the only person who was able to go from one word into the other, from the world from the death into te world of the living, and vice versa, was you yourself. Only you could do that. You did it in every spectacle. Every day. Constantly. Travelling from death to life and from life to death was normal for you. The impossible was normal to you.
So how can we believe that you are dead now? As for me, I don’t believe it. When I walked behind the glass carriage, that snowy day in December 1990, when you were driven from Kanonicza street to Rakowicki cementary, then I knew that you cannot die. You walk from here to the other side, and from the other side to here. You cannot die. You still walk from there to here. Now, e.g. That’s why we are here. We see you, we hear you. We laugh (because people without humour, you said, are not intelligent), and we are a little bit afread (maybe you will shout that you need a bigger table), we listen to you and we say: yes, you’re right, we have to be vigilant, we have to reconstruct the Room of our Childhood and to be aware that war is maybe not over, that Auschwitz can happen again, that people are capable of destroying each other.

Please, keep on going from that side to this side. Keep on worrying us. Keep on laughing with dictators of all kinds. Keep on reconstructing the poor Room of Imagination. Keep on throwing with tables. We are so grateful!