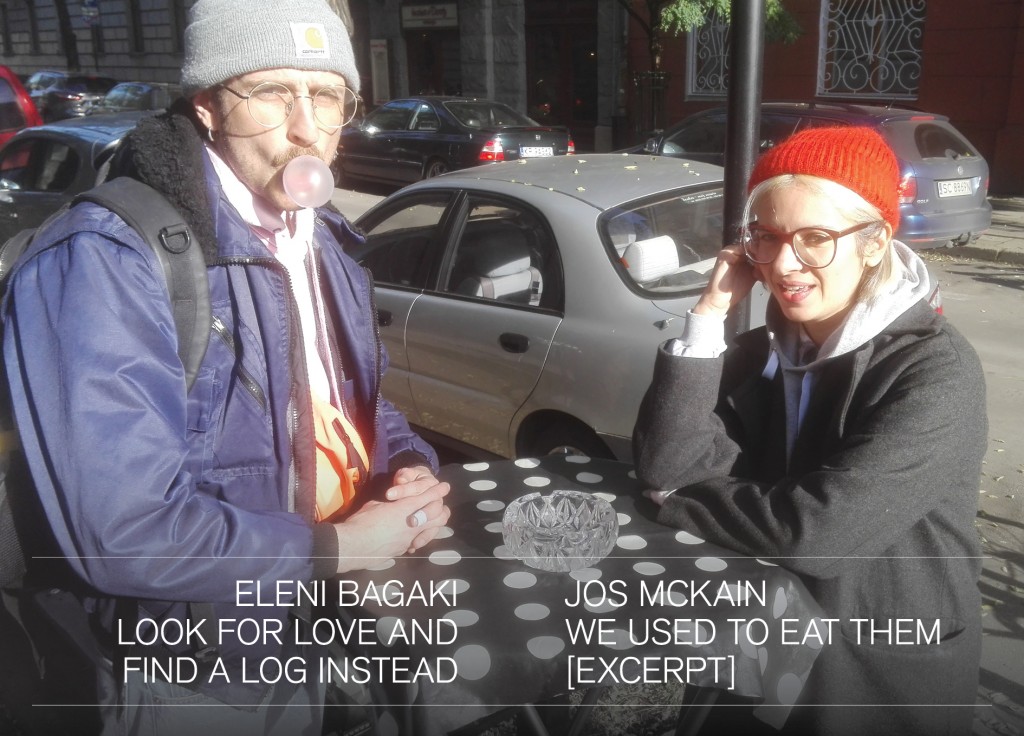 26.11.2017, at 3pm
Open presentation of new projects by artists in residence
Jos McKain – we used to eat them [excerpt]
Eleni Bagaki – Look for love and find a log instead
Tadeusz Kantor and Maria Stangret House in Hucisko

Final presentation of projects carried out by autumn artists-in-residence in Hucisko, Jos McKain and Eleni Bagaki. The evening will comprise of two separate works by the artists who spent their time in Kantor’s house this autumn. The artists developed two very different works, grounded in their own creative practice.

Eleni Bagaki will present Look for love and find a log instead the first part of her ongoing project based on the idea of leaving. The artist for the following months puts herself in a state of continuous leaving. Wherever she goes to, she leaves. Leaving becomes a device for personal transformation and a space of transition and contemplation.

Her first leaving place is Hucisko. During her stay in Hucisko she writes a story about an artist, a curator and a log inspired by the form of a contemporary female Western.

Jos McKain will present an excerpt from we used to eat them, an ongoing performative research into the politicized body as spectacle in relation to the proliferation of media contained under the “Net”.

In the global landscape today, after the disappearance of egalitarian cultures, we see only two actors: the first actor is the all-pervading force of financial abstraction, the second is the proliferation of rancorous reactive identitarian bodies..the impersonality of the financial abstraction escapes any attempt at conscious political transformation, so people who have lost control of their lives cling to a sense of illusory belonging: nation, religious faith, and ethnicity protections against insecurity and loneliness. They are also tools of aggression used against competitors… Aggressive belonging is the only form of cohesion.

The Internet is an altered state, a new dimension, a new evolution. A thing of potential prophecy. We inhabit forms of evolutionary potential handed a future that tastes of aluminium and ash where we mistake windows for mirrors and lick each another with bitter tongues.
Proceed to the counsel of:

no fear
no fomo
no future

The body is the network formed; a tool which extends as branding, chain-liking like chain-smoking, hash-tagging into the void imbued by palm gazing. The world is unalterably different, beyond the eschaton, the omniscience of what is available in our palms extending to cocoon our bodies in the richness of the planet’s knowledge.

We face the end of the world, the end of a world where we base our identity on what we recognize as useful, in these days the most useful thing is to repudiate. So we repudiate everything. We are unable to say anything effective about events and things that surround us. We are being colonized by biofinancial capitalism. We must adapt systems to survive or be conquered. The essential transhuman hypothesis is false; the body must evolve through effort, through physicality or become a relic of the past, make the Internet dance.

The project is supported by Adam Mickiewicz Institute / Culture.pl